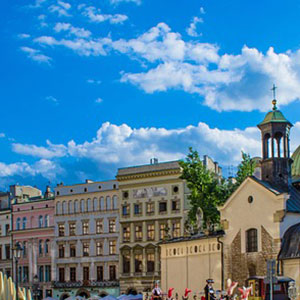 Discover remarkable culture and history on your guided tour of Poland. Escape for nine days in the affordable and less-crowded off season to explore this country rich in proud tradition. Begin in Warsaw-gateway city between East and West-for remarkable sightseeing, from the 14th-century Cathedral of St. John to remnants of the Jewish ghetto. In the University town of Poznan, see the baroque St. Peter and Paul Cathedral and Old Market Square before dining on regional specialties. Learn about the turbulent history of Silesia and its historical capital, Wroclaw. Admire its fine patrician houses during a guided tour and a visit to the Market Square. Stop in Opole, one of Poland’s oldest cities, and continue to Czestochowa. Visit the Jasna Góra Monastery-home to the Black Madonna, venerated as the “Queen of Poland” and the country’s national symbol. As you travel to Krakow, stop at the Auschwitz and Birkenau concentration camps for a guided tour of the notorious and chilling sites of the Holocaust. The following day, join a guided walk through Krakow’s historic Jewish center in the Kazimierz Quarter to enjoy its cafés, antique shops, and art galleries. Explore the Remuh Synagogue and 14th-century St. Mary’s Church before returning to Warsaw to conclude your off-season travel to Poland with a farewell dinner.

Prices are per person, land or cruise only, based on double occupancy. Offer subject to availability and change without notice. Some restrictions may apply. Please ask us for details.

Charges not included in the land vacation price: airfare to and from the start of your vacation; airline baggage fees including checked and/or excess baggage fees; Federal inspection fees for the Federal U.S. Customs and Immigrations; agricultural tax; other per person taxes imposed by government entities; applicable cruise taxes, fees, fares and port charges; passports; visas and vaccinations; transfers; tips to your Tour or Cruise Director, Local Host, driver, Local Guides, and/or ships’ crew; gratuities on ferries, trains, and cruise ships; laundry; telephone; minibar; alcohol, beverages, and food outside of the contracted menu as presented at a hotel or restaurant (these extra items will be billed to you before leaving the hotel, ship, or restaurant); additional excursions and activities not listed as ‘included’ in the itinerary; porterage at airports or train stations; Travel Protection premiums; and all other items of a personal nature.

Click on the buttons below to request a quote on this deal or contact us directly with further questions or comments.

Request A Quote Send To A Friend Have A Question? Contact Us

Send To A Friend

Please don't close or refresh the page while we are processing your submission
Please be patient, this could take a few minutes.